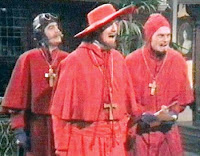 Brett was troubled by Gerry Prokopowicz's line of questioning with guest Scott Patchan on Civil War Talk Radio. There are two possible explanations for the "inquisition" ...

(1) Dr. P was trying to elicit from Scott why his work is important to a broader audience; that is to say, he may have been serving the interest of his general radio audience by drawing Scott out.

For some reason, GP really takes that public history stuff seriously despite his own righteous instincts and better nature. Public history is like a last mad youthful adventure. He'll come home eventually.

In any case, everyone should be ready to explain the broader meaning of their work, though nobody expects the Spanish Inquisition.