The joke is on Glass 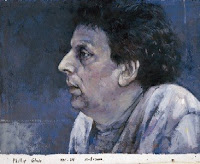 The intriguing question of "What was Civil War music?" occurred to me yet again, this time while reading the Baltimore Sun's amusing review of Glass's opera Appomattox.

The reviewer, bless his heart, cashed out some bonus airmiles to go to San Francisco at his own expense. He considered himself paid back by Glass (right) with "a preachy civics lesson" and "a detail-laden libretto that would work fine on the History Channel." He also mentioned "several unexpected harmonic turns and bursts of folk or camp songs that richly conjure up the 1860s."

Holy cow - I forgot to notice. The deeply flawed, totally misleading doo-dah theory of Civil War music has reared its ugly head once again and Glass appears to be a doo-dah-ologist, plunking hokum into his score. It just hadn't registered with me in press reports. 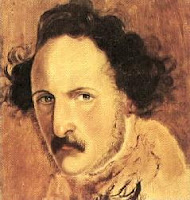 This is a rich joke and the joke is on Glass. The Civil War public was mad for good music, especially opera, and it would seem to the casual reader that they loved Donizetti (lower right) especially well. A period musical interlude in Appomattox would therefore have evoked strains of Donizetti's most popular airs (in the midst of Glass's minimalism). That would have been a nice challenge for the composer and provided the audience with a little tension-relief.

Given the Donizetti revival, Glass could have done Appomattox entirely as Donizetti pastiche and scored a popular hit.

Per that revival, I expect to find our reviewer at Donizetti's Maria Stuarda when it opens in Baltimore in two weeks (no frequent flier miles needed there). But of the 12 Donizettis staged in New Orleans before the war, Mary Stuart was not one of them, which leads to the question which Donizetti operas should Glass have pillaged for his "evocative" interlude?

Hmmm. I was browsing this Civil War CD on Amazon when it struck me that in the dance music category, Civil War audiences sure loved their polkas. Looks like much of this list is polkas and waltzes with Verdi and Mozart thrown in for good measure.

So our answer is (I think) Glass should have dredged up some dancy Donizetti bits. Then he could try scoring them minimally. (Bel canto minimalism - that would be one for the music history books.)

So when will we see the next National Conferences on Music of the Civil War Era? I can hardly wait.

(Past opera on this blog: Lincoln at Magic Flute; Faust in Sykes'division; Escape from Goober Peas; Wagner meets Sheridan's horse; Gottschalk in and out of New Orleans; Rant against doo-dah)