David Woodbury's mini-series on Walker Percy (right) reminded me that Foote always credited the Percys with keeping the Klan out of their (mutual) hometown of Greenville, MS.

David's riff on Hollywood's failure to execute Percy film options also reminded me of the Correspondence of Shelby Foote and Walker Percy, published back in 1997, wherein we find this memo:

Finished the filmscript this week and am going down home [Greenville] tomorrow for a visit. It has the makings of a great movie, but what they do with it is their affair. There's no nonsense to it, a true picture of the war in its last stages, off in the Valley as it turned bitter - hanging and retaliation, and the effect this sort of thing had on the men engaged: hangers and hangees. I like it. Of course I hope they do a good job. But after all it's not my craft or even concern. Stanley Kubrick is the director; the only authentic genius to hit Hollywood since Orson Welles, they say. I believe it. He'll do a good job if anyone will.

In later interviews, Foote (photo, mid-right) referred to the unmade movie by title, "The Down Slope."

In the brief period between the appearance of Correspondence (1997) and Kubrick's death (1999), no one seems to have bothered to track this valuable property down, or rather no one admitted it was lost.

In a bizarre article syndicated worldwide 11 months ago, the script reappeared:

... three manuscripts, all written in the late 1950s, were found after Kubrick’s death in 1999 in one of the many trunks where the director hoarded valued possessions at his home near St Albans.

Two of them were almost full scripts, according to Philip Hobbs, his son-in law, who worked with him for 12 years. "One is called The Down Slope and was written with the American Civil War historian Shelby Foote. It’s a strong anti-war film set against the backdrop of that conflict."

We know from the Correspondence, quoted here, that Foote thought the script completed and good rather than "almost full." Nor is it surprising that Foote's powerful psychological studies (see Follow Me Down), here applied to "hangers and hangees," would be simplistically labeled "anti-war" in Hollywood production pitches.

What was in that script? There is an interesting clue in this PhD dissertation on Kubrick:

This unfinished screenplay about a Southern guerrilla force in the American Civil War was based on research by Shelby Foote.

This reference is not cited, but it may have borrowed from this film website.

Foote wrote only one screenplay for Kubrick (photo, bottom right) , and as we saw, he mailed it at the end of June, 1956. He considered it complete and ready to film. The way he washed his hands of it suggests it was commissioned and the commission fulfilled. 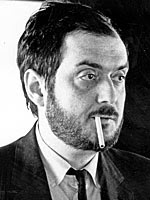 This dissertation was submitted in August of 2006, at least 60 days before the "find" of "Down Slope" was announced to the world. By itself, does the dissertation imply Kubrick may have subjected the script to rewrites in the period 1958-1959, laying it aside as "unfinished?" Is this the origin of the title, "Mosby's Rangers?" Or is this all the fog of memory trying to recover facts about a lost manuscript?

In the New York Times online bio of Kubrick, we find this entry: "... an untitled film about Mosby's Rangers, a southern guerilla force active during the U.S. Civil War..." Very foggy indeed. It's as if Mosby's Rangers became a project title by default.

Are these two different screenplays: one complete but unsatisfactory to Kubrick (Down Slope), the other incomplete and unsatisfactory (Mosby's Rangers)? Note that the son-in-law refers to a script written with Kubrick where Foote's correspondence makes no reference to collaboration.

We learned last November that

Kubrick’s widow, Christiane, said last night: “Stanley threw a lot of things away. These [original rediscovered scripts] weren’t among them, so he really liked these three projects.

With the discovery of the scripts, "Mosby's Rangers" disappears (though not from the NYT bio page) and the name "Down Slope" emerges and synchs up with Foote's own references to the screenplay. The son-in-law declares it written with Foote rather than by Foote.

So what do we have here?

Whatever it is, given the fate of Walker Percy's adaptations, I don't think we'll see "The Down Slope" anytime soon.