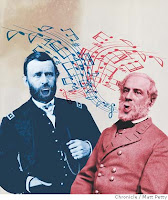 The New York Times: We find, in this piece, the hook that has snared modern reporters, Appomattox as a symbolic starting point for modern race relations history:

The time-tripping second act includes an account of an 1873 massacre of a black militia unit by white supremacists in Louisiana; an original folk ballad about Jimmie Lee Jackson, a young black civil rights marcher killed by an Alabama state trooper in 1965; and a soliloquy by the aged Edgar Ray Killen, a Ku Klux Klan member convicted in 2005 of manslaughter for organizing the murders of three civil rights workers in Mississippi.

The San Francisco Chronicle: We learn that Grant and Lee are to be "battling baritones." And Glass recalls his youth as a child in WWII:

My memory of the war is the women, the sorrow of women, the anxiety of women.

He seems to appreciate the principals as people:

"Grant was a man of tremendous intellectual scope," he says. "It occurred to me that there are no people in public life of his and Lee's stature. I don't mean just in America, where we always have to beat up on ourselves, I mean globally. We don't have statesmen anymore, we have politicians."

The San Jose Mercury News: This is a fairly perfunctory interview per the standard rock-and-roll formula; it has no musical content and is focused on career developments and the subject's likes and dislikes.

Contra Costa Times: We receive assurance here that this is is Civil War opera.

The meeting of Grant (sung by Andrew Shore) and Lee (sung by Dwayne Croft) is at the core of the opera, and Glass says that everything in “Appomattox” is drawn from history.

“For any composer, all we can do is visualize and imagine a piece. We need musicians and singers and performers to bring it to life, and that transaction, going from the imagination of the composer to the stage, is an extremely interesting time. We talk about a piece being realized—made real—and it can only happen once like that. There will be other productions, other performances, but it’s that first time that is always so exciting. It’s like watching an infant stand up and walk.”