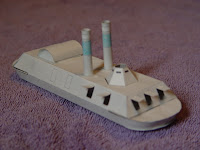 This invaluable book is out today in a paperback edition.

The Civil War is a field abounding with the question, "What is success?" The pop histories keep it simple, stupid: success is accomplishing what Lincoln tells you to do, when he tells you to do it.

The more prestigious Centennial authors go just a little further, giving you "on the one hand this, on the other hand that" - that seems to push the limit of complexity.

The actual Civil War data is immensely more difficult. Taleb would say, fairly treated, its dimensionality is almost unmanageable. The whole problem of McClellan shows us, for instance, that you can do your uttermost for the cause, seem to succeed, seem to fail, and then be publicly reviled until the end of recorded history. That's "dimensionality" non-history readers rarely encounter except in their private lives.

In Civil War Ironclads, we find just such a problem on the institutional level: a successful shipbuilding program that wins control of the seas in such a way that no one wants anything to do with it ever again. Or as the publisher says, the U.S. Navy's shipbuilding programs were set back a generation by Union "successes" in the ACW - if they were in fact "successes."

p.s. I have arrived home this evening to find a copy of the paperback has been sent me by Johns Hopkins. If you'd like a copy of this book drop me a line - I have the hardback already.