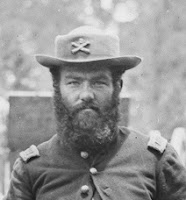 Civil War Times Illustrated, in what must be the final issue edited by Chris Lewis, has an article by my friend Moe D'Aoust, "Unravelling the Myths of Burnside Bridge."

McClellan claimed he sent an 8:00 am order to AB to attack; historians hostile to McClellan claim GBM lied about this time in order to make Burnside look even more unresponsive than he actually was.

Burnside, for his part, claimed the attack began at 10:00 am. The ardent Republican General Jacob Cox, in charge of the push, later revised his opinion to support Burnside's 10 am timeline. Oddly enough, most evidence shows the attack starting at about 9:00. D'Aoust reviews the OR and sees no report (Rebel or Union) supporting a 10:00 am attack.

Furthermore, he finds in John Ropes' writings reference to a statement by GBM's ADC John Moulder Wilson: "In my diary now before me, written at the time, I find as follows: 'At 8 o'clock a.m. I carried an order from Genl. McClellan to Genl. Burnside to charge and take the bridge in front of him and the heights beyond...' "

Very interesting stuff - on sale at a newsstand near you.

(Top right, Wilson in June of 1862, days away from winning the Medal of Honor.)