Author: Maryland was not ready for secession 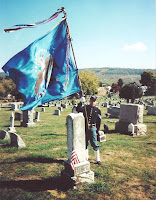 I have been quoting Maryland Voices in the Civil War and the Baltimore Sun has just run an article on its author/editor Charles Mitchell.

As you have seen from the Dix material that Mitchell included in his book he has a revisionist sensibility:

That may be getting ahead of the influence of Maryland Voices. And we all understand that one can dispel anything with selective quotes and that a title like Maryland Voices does not provide readers with insight into what sources were excluded.

But I do have a weakness for re-looks, anytime and anywhere. I and do think it is legitimate to compile material excluded (or underweighted) into its own volume specifically to challenge the status quo - especially if it is identified as such a challenge.

p.s. It seems from this piece that we worked for the same publisher in the same office in Baltimore 2003, though I don't remember Mitchell.