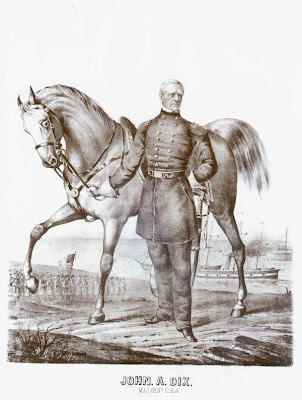 To the reader of Maryland Voices in the Civil War, General John Dix seems like an ambassador from modern times sent back to restrain the excesses of the Lincoln Administration and the barbarism of local ultras.

Shortly before the Maryland elections of '61, we find him responding to two men seeking his authorization "to administer to all persons of doubtful loyalty who offer their votes" an oath of allegiance to the Constitution. Dix replies,

The [state] constitution and laws of Maryland provide for the exercise of the elective franchise by regulations with which I have no right to interfere.

This is an absolute "no." He could leave it at that but he offers the writers a bone: he has just issued an order that if combatants against the U.S. are found trying to vote, they should be arrested by state authorities until they can be taken into federal custody - the same for anyone aiding or abetting them. He then ties the two matters together, the oath and the enemy sneaking in votes:

I consider it of the utmost importance that the election should be a fair one and that there should be no obstruction to the free and full expression of the people of the State...

Two kinds of "obstruction," you see. To ensure the readers of this letter understand that the oath is one of the obstructions referred to he adds,

But it is in the power of the judges of election under the authority given to them to satisfy themselves as to the qualifications of the voters - to put to those who offer to poll such searching questions in regard to residence and citizenship as to detect traitors and without any violation of the [state] constitution or laws of Maryland to prevent the pollution of the ballot boxes by their votes.

On the face of it, this seems a safe and sane response: the laws are on the books, my jurisdiction is elsewhere, I will endeavor to keep my jurisdiction (Rebel soldiers) from interfering in yours (citizens voting).

However Dix is making some interesting statements of principle here: (1) the voter cannot be disqualified based on what is in his heart (2) the army will not monitor polling places, rather "the [civil] judges of election" will do so as locally prescribed and (3)the loyalty oath administered in a state not seceded is as much an interference in elections as Rebels crossing the lines to vote in a loyal state's poll.

Dix is taking us into the realm of political philosophy here.

The monumental philosophical challenge facing McClellan (as well as Buell, Schofield, and Halleck in the early war) was how to put down a revolution without launching a counterrevolution. McClellan knew he was fighting to restore a certain political order and not to create a new (counter)revolutionary alternative to the Confederacy or to the old order.

Dix's problem was similar but not the same: unlike McClellan, et al, he was not an occupier but a district commander. He had the supremely conservative task of preserving the existing order in the midst of revolutionary regional upheaval in a state not seceded. And he had no practical military or civil policy guidance from Lincoln - no one ever had, every commander was always completely on his own until he made a significant political mistake.

It's possible, looking at Dix's lack of mistakes, to say he was brilliantly successful in his role. He was also successful philosophically, preserving the existing order following his own principles ... which might said to resemble the principles we prefer today.