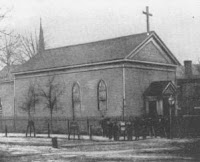 He saved Atlanta's churches in 1864 and is in the news today:

Atlanta Mayor Shirley Franklin posthumously recognized Father Thomas O’Reilly with the Phoenix Award, which was placed by his marker at Atlanta City Hall on March 9.

It was in the fall of 1864 that Father O’Reilly first heard of Gen. William Tecumseh Sherman’s plan to destroy the entire city of Atlanta by fire. Father O’Reilly was outraged and Patrick Lynch drove the priest to speak to Gen. Henry Slocum, a subordinate of Gen. Sherman. “In this meeting, Father O’Reilly argued that the order to burn homes and churches was beyond the normal confines of warfare,” Mears said. “Father O’Reilly pleaded for a compromise that would spare Atlanta’s five churches.”

At first Gen. Sherman rejected the priest’s proposal. But Father O’Reilly would not relent and reminded the general that many of his own troops were Catholics and would create a mutiny if Catholic churches were burned. As a result of Father O’Reilly’s heroics, five churches in Atlanta—St. Philip Episcopal Church, Central Presbyterian Church, Trinity Methodist Church and Second Baptist Church, as well as the Catholic Shrine of the Immaculate Conception [top right, shown in 1848], were spared. In addition, Atlanta City Hall, the Fulton County Courthouse and a residential area between Mitchell and Peters streets were saved.

There was a parallel effort, by such of the city fathers as were still on the scene, to head off a holocaust of starvation, disease and exposure. This was sent to Sherman on 9/11/64:

Sir: We the undersigned, Mayor and two of the Council for the city of Atlanta, for the time being the only legal organ of the people of the said city, to express their wants and wishes, ask leave most earnestly but respectfully to petition you to reconsider the order requiring them to leave Atlanta. [...] As you advanced, the people north of this fell back; and before your arrival here, a large portion of the people had retired south, so that the country south of this is already crowded, and without houses enough to accommodate the people, and we are informed that many are now staying in churches and other out-buildings.

This being so, how is it possible for the people still here (mostly women and children) to find any shelter? And how can they live through the winter in the woods—no shelter or subsistence, in the midst of strangers who know them not, and without the power to assist them much, if they were willing to do so?

This is but a feeble picture of the consequences of this measure. You know the woe, the horrors, and the suffering, cannot be described by words; imagination can only conceive of it, and we ask you to take these things into consideration. [...]

GENTLEMEN: I have your letter of the 11th, in the nature of a petition to revoke my orders removing all the inhabitants from Atlanta. I have read it carefully, and give full credit to your statements of the distress that will be occasioned, and yet shall not revoke my orders, because they were not designed to meet the humanities of the case, but to prepare for the future struggles in which millions of good people outside of Atlanta have a deep interest.

This is the same letter from which Sherman's celebrated quote comes, "War is cruelty and you cannot refine it." He uses the occasion of a plea for mercy to make a speech justifying his cruelty before the ruling Republican Party and before posterity:

We must have peace, not only at Atlanta, but in all America. To secure this, we must stop the war that now desolates our once happy and favored country. To stop war, we must defeat the rebel armies which are arrayed against the laws and Constitution that all must respect and obey. To defeat those armies, we must prepare the way to reach them in their recesses, provided with the arms and instruments which enable us to accomplish our purpose. Now, I know the vindictive nature of our enemy, that we may have many years of military operations from this quarter; and, therefore, deem it wise and prudent to prepare in time. The use of Atlanta for warlike purposes is inconsistent with its character as a home for families.

At the end of this little political speech he has returned, somehow, to the topic of what is in the best interest of the families he is about to destroy: "

There will be no manufactures, commerce, or agriculture here, for the maintenance of families, and sooner or later want will compel the inhabitants to go. Why not go now, when all the arrangements are completed for the transfer,—instead of waiting till the plunging shot of contending armies will renew the scenes of the past months."

Sherman as welfare case officer. The city officials have just told him why not - the city is made up of single parent families with no means of sustaining themselves. They can "get by" in the city now, or try to. To leave is to accelerate their doom.
So O'Reilly succeeded in saving a few buildings and is celebrated in a small way. Mayor Calhoun failed to save uncounted lives and is forgotten. Sherman, needless to say, is revered and readers invited to revel in his hard war policies. They get his cute quotes minus the shocking pleas.
It's Civil War history in a nutshell.
***
(Photo: Sherman's death mask.)