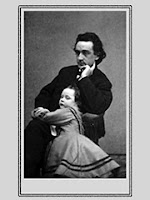 What a great idea. See "... the man behind the legend as he opens a trunk of costumes bequeathed to him by his infamous brother, John Wilkes Booth."

A one-man show: "... actor Gary Sloan—along with his collaborators—has adapted Booth’s letters and selections from the actor’s famous Shakespeare roles."

(Booth with his daughter shown at right.)