Questions of party and patronage 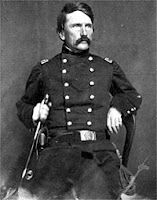 Missouri's Radical Union Party pops up in a few places in the new book Frank Blair: Lincoln's Conservative. The reference tantalizes, with the author (William Parrish) failing to color his story much with the RUP's fortunes. He does further tease us though with an RUP split in which the Liberal Republican Party emerges.

Is it my imagination or is the political historian of the war generally a hash slinger? It seems to me that all local variations and peculiarities are stirred into big pots of tasteless mush labeled "Republican" or "Democrat." This makes it impossible to trace patterns of patronage and party alignments down to state and local levels.

And if you cannot trace such patterns, you can have no clear idea of when the national interest or the war effort are being subordinated to something less lofty.

There are exceptions to this carelessness with distinctions. I think most well-read ACW readers know, for instance, that there was no Republican Party in Simon Cameron's Pennsylvania - the odium associated with the name was too damning. But the question remains (for me at least) as to how the People's Party got delegates into the Republican convention of 1860. Or did they?

Deep readers also know that in Rhode Island, the Democrats were the party of Lincoln (hence the collaboration with Governor Sprague and Ambrose Burnside) while the Republicans were anti-Lincoln radicals. How did Lincolnian patronage work in that state? And in Pennsylvania?

Something that has bothered me for a long time has been the short shrift given by the common run of political histories to the National Union Party. (If the name of that outfit sounds unfamiliar to you, do me the favor of firing your favorite authors.)

I especially want to know how its formation affected the flow of patronage after November 1864.

The new Blair biography reminds me I am not getting my needs met in these political tomes.

(Picture, topside: Frank Blair, not a Radical unionist, not a Liberal Republican.)