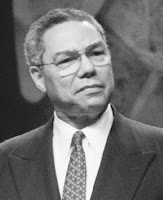 I have been trying to better understand the current cockamamie high command structure and was lucky enough to find this helpful essay - an article that opened up a lot of memories.

Recall that a decade ago, Colin Powell was using the current pop history construct of McClellan to denigrate certain tendencies in commanders. McClellan was a stick with which to beat certain devils. It struck me as ignorant and unfair; even if pop history had "got it right," still no modern commander would dream of running the risks run by junk history's cardboard version of McClellan. Not in this day. 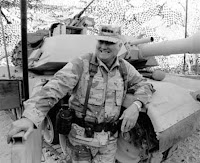 It did not occur to me at the time that Powell might be jabbing Schwarzkopf; this same article offers dots to connect:

The issue of the accusation of "McClellan-ism" came from a civilian advisor to the President, and did cause some second-guessing of Schwarzkopf's planning and abilities. This was not to be done without some shielding and screening from Powell acting as the liaison from the CINCCENT (Commander-in-Chief US Central Command) to the President. Schwarzkopf's requests for additional forces were met, and even exceeded his requirements. This served to build trust between the two generals, but there were also a few heated discussions. 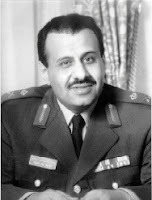 The joint forces commander in the first Gulf War was, in accordance with the murk favored by modern high commands, neither Schwarzkopf nor Powell but HRH Khaled bin Sultan, a Saudi officer. Obviously he was not "a civilian advisor to the president," but he wrote in his memoirs many things resonating with a cartoonish McClellanism in the U.S. effort. Let's start with the McClellan intelligence meme:

There was, for example little agreement inside the Coalition about how many Iraqi troops were deployed in the Kuwait Theater of Operations. This was to be the subject of much debate and controversy after the war. Intelligence analysts had come up with a figure of 547,000. As I understand it, this estimate of the Iraqi troop strengthwas arrived at by multiplying the number of Iraqi divisions known to be in the theater by the number of troops an Iraqi division was supposed to have - or had had in the Iraq-Iran war.

I note (once again) that this was Pinkerton's methodology in estimating Rebels and that he (unlike modern intel types, it seems) was extremely accurate in identifying enemy units in theater. Khaled continues, "...postwar research has suggested that these intelligence estimates were hugely inflated..." He makes the embarassing observation that "there was simply no room in the Kuwait theater for the numerous full strength divisions which western intelligence agencies believed were there."

The McClellan "readiness meme" also appears in several places. Khaled on the American general Fred Franks: "Before moving, he wanted to be sure all his supplies were in place and that there was no possibility of an enemy counterattack."

As I saw it, Schwarzkopf's contribution to the conceptual basis of the campaign was a reluctance to take risks. As a military commander, he was careful rather than bold. Right up until the end, he persisted in believing - and declaring - that Iraq was a formidable opponent which should not be underestimated. He seemed particularly apprehensive about Saddam's armored Republican Guard divisions. Hence his pressure for more and more troops, planes and supplies, and for the Abrams M1A1 battle tank...

Khaled accidentally touches on legends of the McClellan entourage when he recalls Schwarzkopf's stay in Riyadh:

Schwarzkopf surrounded himself with a great deal of very visible security - a posse of soldiers and plainclothesmen accompanied him everywhere, guns at the ready. I felt obliged to do the same. If a Saudi on the street saw Schwarzkopf's armed escort and then saw me with just one or two guards, he would immediately conclude that Schwarzkopf was the supreme commander. That I could not allow.

Well, the sword has two edges, and in recent times the McClellan-bashing Powell has been poked with his own stick. Khaled has not fared well either.

And it is amusing to see columnists wonder now if Petraeus is Grant or McClellan (meaning, of course, whether our incomplete understanding better matches the false Grant archetype or the false McClellan archtype).