A little short of touring weather 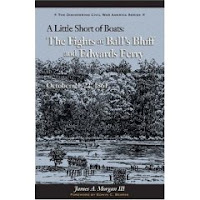 The shad are running (need I say?) and up and down the East Coast annual shad festivals are popping up like daffodils. Their roe is in the shops but at Ball's Bluff, snow still covers the ground through another weekend; the first wave of local bulb plants has been crushed by ice and frost and my second trip to the battlefield has been postponed yet again due to weather.

The first trip was a fiasco. The markers made no sense to me. I could not figure the limits of the battlefield. I could hardly find the battlefield, belted as it is by suburbia and dead-end streets. The forest service which owns the battlefield has made sure it is covered with trees that were not there in 1861, further complicating things.
About Christmastime, I bought A Little Short of Boats: The Fights at Ball's Bluff and Edwards Ferry to help me sort it all out. It's a fine book with lots of maps and pictures. Eric Wittenberg's company published it and it's going into guidebook service as soon as I can get a fine day off.
There will still be mysteries, though. Author James Morgan III writes, for instance,

Not much more of substance is known about the Baker [grave]stone... What has not been verified is who erected it, exactly when it was erected, or whether it actually marks the site of Baker's death.

Nothing about Ball's Bluff is easy, you see. Nothing at all.
***
On a chat board, Morgan noted that he was confused by his own first trip to the battlefield and provoked to do research by the trashy state of Ball's Bluff information: "The writings on Ball's Bluff tend just to repeat each other. There seems to have been very little original research over the years." (Is he talking Ball's Bluff or ACW literature generally?) More chat info here. Scroll down.
Morgan spoke with Gerald Prokopowicz here. A review of the book appears here.
The strongest high-level analysis of the battle's meaning appears in Russel Beatie's second volume of Army of the Potomac. Activity in Leesburg was mistaken for a Rebel evacuation; it would have been the enemy's third pullback from the Potomac line in weeks and it would have led to the third such Union occupation of enemy positions.