Lincoln at the opera 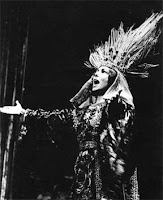 I had promised a Lincoln opera story.

In his pop biography Lincoln, David Herbert Donald has the anecdote we need. He notes that in mid-war New York opera companies began exporting productions to Washington and that Lincoln became a regular. On one of these excursions, to Mozart’s Magic Flute, Lincoln was accompanied by then-Colonel James Wilson who recorded his impressions of the evening. From Donald:

... he remarked … that the exceptionally large, flat feet of one of the leading female singers meant “the beetles wouldn’t have much of a chance there!” During most of the opera, Wilson recalled, the President “sat in the rear of the box leaning his head against the partition, paying no attention to the play and looking … worn and weary.” When Wilson asked if he were enjoying the opera, Lincoln replied: “Oh, no, Colonel; I have not come for the play but for the rest. I am being hounded to death by office seekers...”

But when Mary asked if he would like to leave before the ending, he said “Oh no, I want to see it out. It’s best when you undertake a job to finish it.”

I dislike Mozart and this opera - as did ante-bellum opera-going America - so I sympathize with the Emancipator's boredom. But as a Washington opera patron, I look about wondering how many spouses continue this particular Lincoln tradition.