One really can't say enough good things about John M. Schofield and the Politics of Generalship.

In my case, readers know I have been following ACW "professionalism" from the purge of "political" officers by Grant and Sherman down to the present day pathologies of job hopping, ticket punching, micromanaging, and promulgating war-fighting values that even John J. Pershing tried (and failed) to reform way back in 1918.
In my case, my blaming Grant and Sherman for a long

string of dark institutional developments appears to be over-reaching, especially in view of the analysis supplied by Schofield author Donald Connelly.
Given the complexity and depth of his material, the limitations of blogging as a medium, and the timespan covered, allow me to touch on a few points of interest. These are gross simplifications:
* Schofield (top, right) had a certain aptitude for politics that was further developed by the types of assignments he held in the ACW. As a member of the West Point fraternity, the men remaking the army after the ACW viewed him as a thorough professional. But by his skills and nature he was political.
* The politically retarded Sherman, assuming the top Army position, weakened it significantly in his losing turf battles with the SecWar and bureau chiefs. Sherman actually moved his offices to St. Louis largely abandoning his job and its responsibilities; this was a replay of Scott's decamping from D.C. to work out of New York after losing turf battles to SecWar Davis. 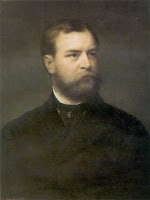 * Sheridan, replacing Sherman, could not make up Sherman's bureaucratic losses; he lost ground himself, especially to SecWar Robert Lincoln (right). He also lost interest in his work, becoming another derelict general officer (in Schofield's words, "General Scott went to New York and General Sherman to St. Louis, while General Sheridan stayed in Washington.").

* Schofield assumed the chief general's position at Sheridan's death and began a program of reform and reclamation. His political experience and inclination helped him much in dealing with the major (bona fide) politicians and the minor practitioners operating out of the Army bureaus.
What kind of reformer was he? Connelly: "In many ways Schofield was an early Progressive. While military Progressives were often different from other Progressives, they shared an obsession with rationalization, regularization, and above all, expertise."
These are core attributes of what Col. John Boyd would have called Second Generation warfare and today's officer corps is nowhere near finished developing them yet. Should we blame Schofield for being ahead of his time when the current generation is just a few weeks ahead of him?
I will have more to say about this and about Connely's book and what it contains, for it appears to me now that Schofield's legacy is more relevant to our present oversupply of spoliated "professionalism" than Grant's, Sherman's, or Sheridan's.