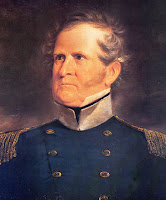 Some say, even today, that Paul Morphy of New Orleans was the greatest chess player of all time. It's been a couple of years since I posted on Winfield Scott's chess game with Paul Morphy and since then have found only one scrap with some details.
The encounter material is poorly sourced. For what it's worth, the year is 1846, Morphy is approaching nine years old.

"Gen. Winfield Scott ... had many aquaintances there (at a chess club on Royal St.), some of them quite intimate, and knowing the habits of the members he repaired to their very comfortable rooms within a few hours after reaching the city. It may be said to have been one of his vanities as well.

He [Scott] was in the front rank of amateurs in his day....he turned to Chief Justice Eustis and asked whether he could play a game of chess in the evening...."I want to be put to my mettle!"

"Very well," said Justice Eustis, "We'll arrange it. At eight o'clock tonight, if that will suit you."

At eight o'clock, dinner having been disposed of, the room was full. Gen. Scott, a towering giant, was asked to meet his competitor, a small boy of about 10 [actually, he was eight and a half] and not by any means a prepossessing boy, dressed in velvet knickerbockers, with a lace shirt and a big spreading collar of the same material.

At first Gen. Scott imagined it was a sorry jest, and his tremendous dignity arose in protest. It seemed to him that his friends had committed an incredible and unpardonable impertinence. Then Justice Eustis assured him that his wish had been scrupulously consulted; that this boy was....quite worthy of his notice.

So the game began with Gen. Scott still angry and by no means satisfied. Paul won the move and advanced his Queen's rook's pawn. In response to the General's play he advanced other pawns. Next he had two knights on the field; then another pawn opened the line for the Queen, and at the tenth move he had the General checkmated before he had even begun to develop his defense.

There was only one more game.

Paul Morphy, after the sixth move, marked the spot and announced the movement for the debacle - which occurred according to schedule - and the General arose trembling with amazement and indignation. Paul was taken home, silent as usual, and the incident reached the end.

The few survivors of that era still talk of Paul Morphy's first appearance in public, but only by hearsay. Gen. Scott lived to wonder that he should have ever played with the first chess genius of the century, or for that matter, of any other century."

I have cleaned up the punctuation; by the look of it, this was scanned, not edited, and then posted on the Internet. My guess is that the undated news clip part comes via an old Morphy biography.

My problem with this account, historiographically, is that Winfield Scott is here arriving in New Orleans under arrest; Gideon Pillow (right) had had him arrested in Mexico and Scott was being repatriated to Washington to stand trial. Scott had the pleasure of having Pillow arrested as well, but the consolation must have been small.
It seems a little loosey-goosey to allow Scott, under arrest, the freedom of the town this way. (I know, back then, terms of arrests of officers could be quite liberal. Still, to plan an evening on the town...)
If Scott did meet Morphy as described, he had much on his mind before play began. Being made a fool of by Pillow had him in a bad frame of mind to be made fool of again by a mere child.

Chess notes on "Paul won the move [drew the White side] and advanced his queen's rook's pawn."
This could refer to a2 - a3. In that case, you might think it represents Anderssen's Opening. It would but not under that name. Oddly enough, the name "Anderssen's Opening" appears to have originated when Adolf Anderssen used it himself three times in one famous match against Paul Morphy in 1858. Did Morphy invent Anderssen's Opening? We find no trace of it in his recorded early games. People call this a time wasting move but it allows the White player to make himself Black by exchanging the initiative. If Morphy drew White and wanted to play Black against Scott, this move would serve that purpose.
"Advanced his queen's rook's pawn" could also refer to a2 - a4
. In that case, Morphy would be playing the Ware Opening. This opening also exchanges the initiative but is weaker than a3 because it exposes the pawn to attack. Morphy played Preston Ware in New York 11 years after the match with Scott and the opening played was more conventional. BTW, Ware was seven years older than Morphy and not likely to have had an opening named after him at the time Morphy played Scott.